Daniel Bosley, former state representative, says the county needs more voices in Boston and someone who will represent its interests.

That’s why she’s running for the open seat on the council in District 8.
“It’s an extension of the work I’ve been doing for a long time in supporting our community, working toward equity, working to improve the lives of those in our community, in our commonwealth,” the School Committee member said at her campaign kickoff. “The things that I’ve been doing up to now are rewarding and I intend to continue doing them.
“But this is a unique and different opportunity that is so important to work that [the council does] and it’s so little understood by the general population.”
The Governor’s Council, or Executive Council, is comprised of eight representatives and the lieutenant governor. It plays a critical role in the justice system in advising and consenting on certain warrants, pardons and gubernatorial appointments.
“The work they actually do is so incredibly important and impactful in the quality of the foundation of our society — confirming judges, putting Parole Board members in place, clerk magistrates — there’s so many elements of roles in the judiciary that go through the Governor’s Council for their confirmation, and have a direct impact on our lives and just the nature of our society,” Jacobs said.
In introducing Jacobs, former state representative Daniel Bosley said people are far more aware now of the importance of fair and intelligent judges in every level of state government “because we’re being failed at the federal level.”
“People don’t have faith in government anymore because of decisions that are made because we politicize the court, because people just don’t think that they’re being represented,” he said. “We need people close to us that will represent us. That will say what they believe, regardless of whether it’s a popular thing or not …  It’s important that we get out and work as hard as we can and that job starts today with Tara Jacobs as our candidate for Governor’s Council.”
She’s the only woman running in the Democratic primary, she’s the only candidate from Berkshire County and she’s the only candidate without a law degree. Those differences, she says, will help her bring a singular perspective to a state body that few voters think about.
Jacobs pointed to decisions like overturning Roe v. Wade that makes “it super clear how important it is who sits on that bench.”
“It is an opportunity that is often served by lawyers and I am not a lawyer. I also think that’s a benefit. It actually serves us as the people to have a voice that represents all of our needs, not just the legal point of view,” she said.
Jacobs is active in the community and local politics, serving in her second term on the School Committee, as chair of the library trustees and chair of the Democratic City Committee. She’s also served on the Berkshire County Commission on the Status of Women and the Northern Berkshire Cultural Council.
She’s hoping to fill the two-year seat being left vacant by Mary E. Hurley, retired judge and former Springfield mayor. District 8 encompasses 96 municipalities in the state’s four western counties.
Councilors have generally been holders of law degrees, like six of the eight current members. The council is probably best known for confirming judges but Jacobs pointed out that those candidates get vetted by plenty of lawyers before they even reach the council. The lawyers know about the council’s work but it’s another group she said that also needs a voice — the people who have interacted with the justice system as defendants, or their family members, or people seeking parole or just the public in general.
“The stories are diverse, but they’re all similar in that there’s an enthusiasm for someone who’s not a lawyer being at that table representing all of us, all of our needs and concerns and issues,” Jacobs said. “And coming at it from the standpoint of a representation that really matters.”
She said she wants to ensure judges are aware of their biases and those implicit in the court and carceral system, and the need for racial and gender equity.
“I want to do this work from the standpoint of dismantling that injustice to promote the standpoint of social justice, racial justice, environmental justice, which is particularly an issue in many of our communities here in Western Mass, and gender and economic justice,” said Jacobs. “All of these are issues that I intend to promote in every decision that the Governor’s Council does.”
She thinks its important for the far western part of the state to have some say in these decisions. There hasn’t been a Berkshire representative on the council since at least 1970.
“It’s extremely important to have another voice from Berkshire County. You know, we’re down with three state representatives in Berkshire County. There’s about 17 or 18 in Boston proper,” said Bosley. “So every voice that we have is extremely important.”
She’s been endorsed by the Massachusetts Women’s Political Caucus and by a number of local Democratic and civic leaders. She’s also received the endorsement of the last two former mayors. Thomas Bernard described her as someone “who thinks very critically, and very deliberately and so she’ll take time to process and talk through and make sure that what she’s doing is ethical, that it’s equitable, that it’s appropriate, that it’s responsible.”
Richard Alcombright, now a colleague on the School Committee, said Jacobs does her homework and doesn’t back down. “When we think about the importance of this office, and what it can bring to Berkshire County, I think we all need to stand behind her,” he said.
Jacobs will be vying for the nomination in September against three other candidates, all attorneys from the Springfield area: Shawn P. Allyn of Agawam, Michael Anthony Fenton of Springfield and Jeffrey S. Morneau of East Longmeadow. The Republican candidate is John Comerford of Palmer, a retired investigator and veterans service officer. 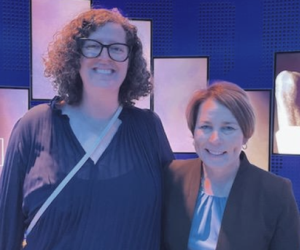